BEIJING (BLOOMBERG) - This Saturday (Oct 14) in Monaco, He Qiaonv will announce the first step in a US$1.5 billion (S$2 billion) plan that may represent the largest-ever personal philanthropic commitment to wildlife conservation.

The number isn't the only thing that's surprising about the announcement. The source might equally raise eyebrows: The donation isn't coming from a known Western conservationist like Paul Allen, but from a landscape planner-turned-environmental steward who's based in Beijing.

Madame He represents a new wave of self-made Chinese philanthropists unafraid to spend; her seven-year pledge stands at more than a third of her current US$3.6 billion net worth, according to the Bloomberg Billionaires Index.

"(China is) pivoting to a new narrative in record speed," said Tom Kaplan, founder and chairman of Panthera, the leading wild cat conservation organization and He's first international partner. "Their (global) reputation has suffered by being viewed as the scourge of the elephant and tiger-and they want to reverse this."

Posted by Chris Dunford at 15:02 No comments:

Scientists have long wondered how goldfish and crucian carp can survive in ice covered lakes with little oxygen and then recover with no apparent ill effects when the weather warms up.

What they have discovered is that in low temperatures they can turn lactic acid in their bodies into alcohol. In the absence of oxygen, eating carbohydrates generates lactic acid which will kill them in high concentration, so the fish have a set of proteins that are activated in cold weather to produce the alcohol which is then excreted via the gills.

In normal times a different set of proteins send the carbohydrates to the mitochondria, where they are used to generate energy.

The longer the fish are in freezing airless conditions the higher the alcohol levels become. It can be above the legal drink drive limit of many countries. However you still very unlikely to get drunk eating them.

Posted by Chris Dunford at 10:41 No comments:

Lynx may be reintroduced to the UK

Plans to reintroduce the Eurasian lynx 1,300 years after it became extinct in the UK will be submitted soon, campaigners have said.

The Lynx UK Trust hopes to obtain six lynx from Sweden to reintroduce into the Kielder Forest in Northumberland.

The five year plan plan may go to Natural England by September.

It has been criticised by some residents and sheep farmers.
The scheme would see four to six lynx wearing radio tracking devices introduced, with Kielder chosen due to its dense woodland and low number of roads.

The trust said the animals would help control deer numbers as well provide a tourism boost.

Although farmers will naturally protest, I can't see the Lynx making much of an indent in sheep numbers, and I'm pretty sure they would get more than adequate compensation for their losses. They usually do.
Posted by Chris Dunford at 17:29 No comments:

The largest population of mountain gorillas in the world has grown to four times the size of its once-dwindling number, as poaching has become virtually non-existent in the Virunga National Park in the Democratic Republic of Congo.

The numbers have gradually increased from around 250 about 30 years ago to 1000 now, thanks to efforts to protect them from poachers. Only one has been poached since 2007.

The Viunga foundation a UK based charity, set up in 2005 has created a good atmosphere in the area by building schools and facilitating businesses and also run a $22 million hydroelectric project in the area which provides power and jobs. These investments have yielded tangible benefits to the people of North Kivu.

The foundation also boosted the salaries of park rangers to  $200 a month, which is eight times the average salary in DR Congo – to reduce the temptation for corruption.

Anthropologist, conservationist, pilot, Emmanuel worked to control the bushmeat trade and protect endangered wildlife in Central and Eastern Africa. His main focus has been support for African wildlife rangers in remote and difficult national parks and reserves. His work was primarily in the parks of eastern DRC, working to sustain the national parks through the DRC’s 15-year civil war.

In 2008 he was appointed by Congolese Government as Director for Virunga National Park. 360 rangers fall under his command and much of his work is focused on protecting the park’s exceptional wildlife, that include a critically important population of Mountain gorillas, elephants, okapis and chimpanzees.

Don't let them drill for oil in Virunga!
Posted by Chris Dunford at 16:06 No comments: 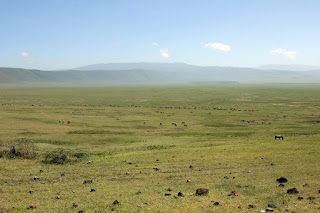 Posted by Chris Dunford at 14:01 No comments:

More than 700 currently Endangered species are being impacted by climate change, according to a major scientific review in Nature. Nearly half of the land mammals (47%) and 23% of birds on the IUCN Red list of endangerd species are negatively affected, particularly including some of our most iconic creatures like elephants and primates. The findings urge action to lessen the impact and safeguard the future of these important species by securing healthy and functioning environments. 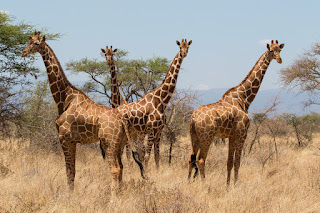 Posted by Chris Dunford at 15:47 No comments:

An investigation will begin in China (where else)  after online images were found showing local officials enjoying a banquet of meat from pangolins – the most trafficked animal in the world.

Pangolin meat is regarded as a delicacy in China, and extravagant feasts are common to show great hospitality.

Pangolins are now very rare in Asia and are being wiped out in Africa to satisfy the demand in China for the meat as a luxury and the scales for Chinese medicine. Animals are often kept alive and have the scales ripped off them as needed.

Posted by Chris Dunford at 11:42 No comments: